Introducing Gamestarter, an NFT-based crowdfunding platform and a cross-chain NFT marketplace that helps indie game developers to fundraise by pre-selling unique in-game assets in the form of NFTs. Similar to Kickstarter’s proven business model, funding on Gamestarter is all-or-nothing. No one will be charged for a pledge towards a project unless it reaches its funding goal. Gamestarter add liquidity, player-ownership, and new funding resources to the largest entertainment industry in the world.

Gamestarter NFT marketplace provides a marketplace to trade digital assets from successfully launched games. Giving the NFTs owners as much agency as possible and the ability to sell and realize real-world value from their holdings is essential for the NFT ecosystem to thrive.

Gamestarter platform’s NFT marketplace will be powered by the native token “GAME”. $GAME Coin ($GAME) is an ERC20-compliant cryptographic token that can be traded on the Ethereum blockchain just like Ethereum and other ERC20 assets. $GAME is both a Gamestarter platform currency and an independent store of value for players and investors alike.

All platform transactions will be handled only through $GAME coin, whether it’s in-game NFTs or marketplace purchases. However, an NFT that costs $100 will always cost $100; the amount of $GAME Coins required to complete the transaction on the blockchain will fluctuate according to the latest $GAME Coin market price. One of Gamestarter’s core user experience philosophies is to provide players diverse ways to easily and instantly earn GAME Coins.

Opportunities to earn GAME Coins include: GAME Coin is used to power Gamestarter platform and fund game developers. GAME Coin tokens will be used to buy and sell NFT’s during the crowdfunding stage and in the marketplace. 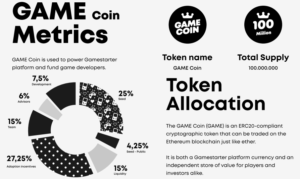 GameStarter specialises in crowdsourced game development. Whether you are a seasoned developer, a casual gamer or anywhere in between, you can help in creating and influencing your dream games.