The birth of the Tokel Platform has attracted a wealth of established artists and unleashed the creative aspirations of hundreds of new creators.

One of the most significant efforts to date, comes from the NFT outfit Cyber Komodos. Their emergence is deep-rooted in the Komodo Ecosystem and they have an experienced team and an enthusiastic growing community.

Cyber Komodos in a nutshell, are the first generative NFT collection that is launched on Tokel’s token platform. It’s a collection that commemorates the Komodo team and all the other projects that have built on Komodo’s technology.

The collection is made up of 777 unique Komodos with multiple rarities. Each trait was hand drawn and an algorithm was used to build the Komodos randomly.

The number 777 has special significance to the Komodo ecosystem as it is part of the username of founder and Supernet blockchain architect, James Lee aka JL777.

Cyber Komodos is a grass-roots project, pioneering NFT creation on the Tokel Platform. It has the core purpose of creating the first NFT collection on Tokel, honoring the Komodo team and its growing ecosystem. All of the tools and processes that the project builds will be documented and open-source in the spirit of the ecosystem ethos towards technology development.

Each Cyber Komodo is hand drawn and algorithmically assembled. Variations have 87 possible traits, including the clothing, skin, eyes, mouth, hats, body and the background. The Cyber Komodos are stored on Arweave and will be sold at $77 equivalent in cryptocurrency. 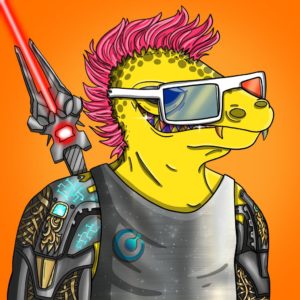 Custom tools such as an Escrow Bot to carry out secondary market trades on discord and a rarity calculator for Tokel NFTs are currently being built. These tools will be open-source and could be also utilized on other platforms, giving Cyber Komodos a technological edge over most existing NFT projects.

Why should you own a Cyber Komodo NFT?

Cyber Komodos are the first generative NFT collection on Tokel Platform. It’s also the first Komodo-themed collection. That means that owning a Cyber Komodo is like owning a piece of NFT history.

ABOUT Cyber Komodos
Cyber Komodos are the first generative NFT collection that is launched on Tokel’s NFT platform. It’s a collection to commemorate the Komodo team and projects that have built on Komodo’s technology.

ABOUT Tokel Platform
Tokel Platform is Komodo ecosystem’s Token Platform. Trustless & decentralized token trading is built into the Tokel blockchain protocol. Each token created on Tokel is automatically listed on the tokenDEX with the token-to-Tokel pair. Users can buy, sell, trade, send and manage their tokens easily, all on the blockchain.

ABOUT Komodo Platform
The Komodo Platform is an end-to-end blockchain solution you can use to launch your own independent blockchain or initial coin offering (ICO). It also includes a decentralized exchange and a cryptocurrency anonymizer to improve the privacy of your transactions.