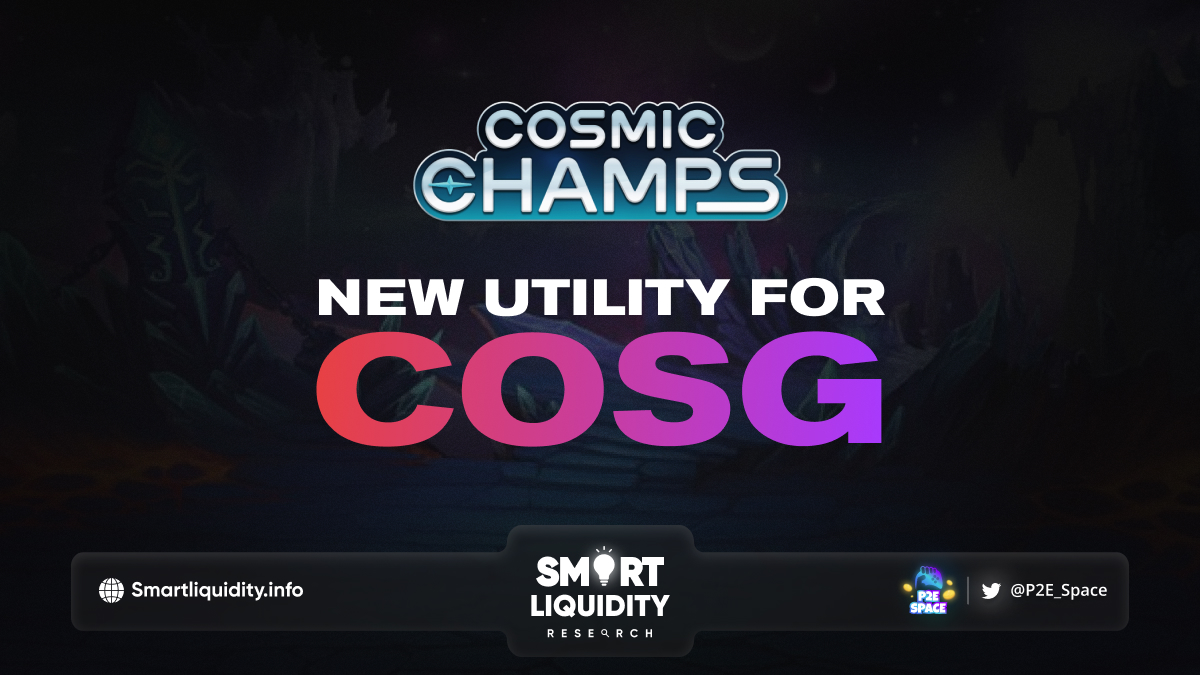 The Cosmic Champs has added new utility governance token, Cosmic Gold to provide amazing new benefits for COSG holders in 2023, including collaborating with the runner-up at Decipher’s Pitch Event, Cometa.

They introduce four reward tiers for holders of COSG. Each tier will receive monthly benefits for holding the required amount of tokens for the entire month. Benefits include tokens for future shuffles, entry to NFT lotteries, in-game boosts to Champs, free battle passes, and tokens for future planet sales.

The common rewards are tokens to participate in future NFT shuffles, tickets for monthly NFT lotteries, and in-game boosts to the stats of Champs.

Each tier also receives a special upgrade to the appearance of their battle dashboard. The upgrade indicates which tier you are a member of.

Tier’s 2 to 4 also have exclusive benefits such as free battle passes and tokens to access planet NFT sales, and the right to purchase a single NFT of your choice from the treasury each month (excluding season 1). The listed rewards will be effective from 1st January 2023. The rewards may change from time to time.

If you want to be eligible for the first reward payout (from 1st February 2023) make sure you have the following quantities of COSG either in your wallet, or in the Cometa staking pool, from 1 January to 1 February 2023. Just to reiterate, your tokens will be counted if they are staked on Cometa so you do not need to remove them the Cometa staking pool to be eligible.

A snapshot of COSG holders will be taken on the first of each month. The snapshots will capture tokens held in your wallet and tokens staked in a Cometa distribution pool.

Currently, they have different benefits planned for LP providers so they are excluded for now, but they may revisit this decision in the future.

Eligibility for monthly tier rewards is determined by two snapshots taken one month apart. Anyone who is holding the required amount of COSG to qualify for tier rewards when both snapshots are taken will receive rewards.

In addition, Cosmic Champs might introduce additional snapshots mid-month if we find it necessary. Each wallet may only qualify for one tier during each one-month period. Each wallet will be assigned to the highest tier it qualifies for based on the amount of COSG held.

Rewards will be distributed shortly after the 2nd snapshot is taken to determine holder amounts for each month period. The rewards such as tokens for future NFT shuffles and planet NFT sales do not expire so they can be used for any future NFT shuffle even if you no longer qualify for a tier at the time of the shuffle. Rewards such as battles passes, in-game boost to Champs, and a modified dashboard are valid for a month from when they are distributed.

The allow list spots for future NFT shuffles and also planet sales will be distributed using tokens. You will need to opt into these ASAs once. The ASA will remain the same each month so you will not need to opt-in again.

There will be a one-week transition period at the end of each month to allow you to prepare for the upcoming reward distribution. During this time, they will announce the new ASAs for the rock NFT associated with each tier. If you fail to opt-in before the distribution of monthly rewards then you will forfeit that month’s rewards. Don’t worry, they’ll remind you so you don’t forget.

What is the monthly NFT lottery?

Each of the tiers is eligible for a different number of tickets in the monthly NFT lottery. The exact prizes of the lottery may change from month to month. Here are the prizes planned for the NFT lottery held at the start of February for holders during January:

How will the NFT lottery work? Since we don’t want to take away too many developer resources from the game development of Cosmic Champs, they probably won’t be writing any smart contracts for this. Instead, they will find the fairest and most fun way of running this lottery and keep you all informed of the final process. It will most likely involve a live stream each month so you can be sure it’s a fair and transparent process.

Their governance token, Cosmic Gold (COSG), rules the Cosmic Champs metaverse. COSG will be used to earn staking rewards, reward players for using the game (P2E), and buying NFTs. When they transition to a DAO, holders of COSG will steer the ship as they will vote on changes to the game. It will also be used to fuel their creator economy which will reward the community for helping build their metaverse.

The ASA ID for the $COSG token is 571576867. To receive COSG, you’ll need to opt into COSG with your Algorand wallet.

Cosmic Champs is a play to earn, tower rush, real time strategy game developed by gaming studio, Mad Shapes. It aims to remove many of the existing barriers of entry for typical P2E games. This means it’s mobile first and no wallet, tokens, or NFTs are required to play. These innovations position Cosmic Champs to become the benchmark for crypto games in GameFi. The game will be available for Android and also iOS devices late in 2022.