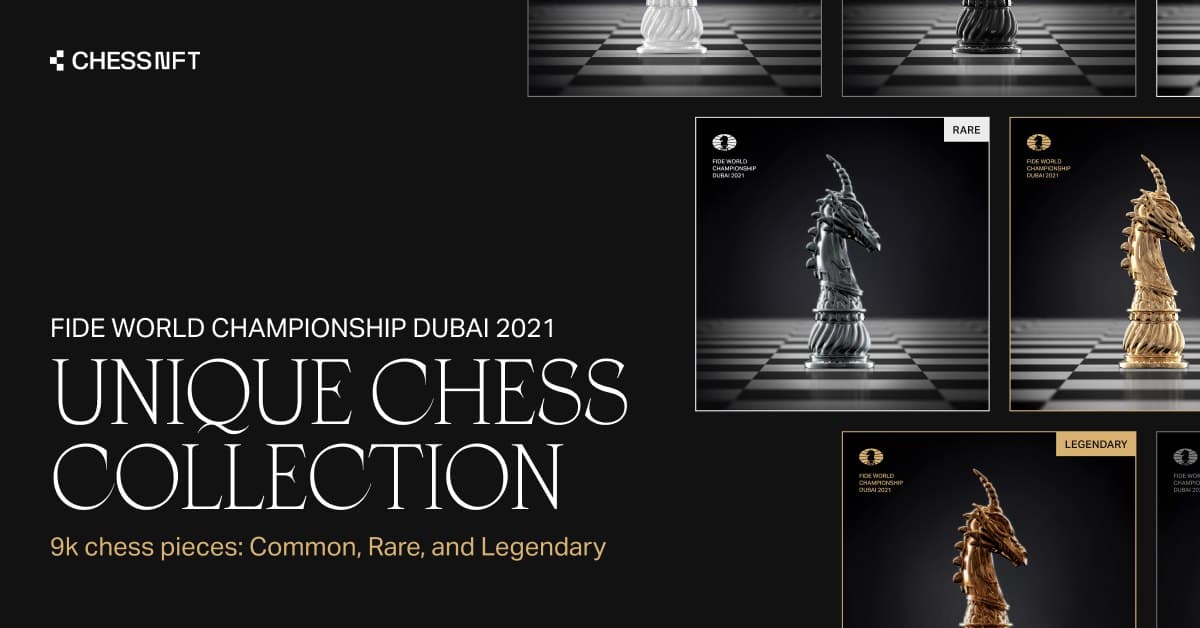 FIDE is the first global sports federation to create its own NFT ecosystem and it does so ahead of the FIDE World Chess Championship 2021.

IMPORTANT: Due to limited circulation, it is allowed to purchase no more than 6 items per account.

After minting (tokenization of a digital item) a random chess piece will be allocated to the collector’s account — everyone has an equal chance of getting a super rare item.

FIDE has recently announces its plans for a Non-fungible token (NFT) marketplace. Which will be launched at the end of November, will be called ChessNFT.

ChessNFT is a new, holistic chess Non-fungible token (NFT) ecosystem. ChessNFT will welcome a new crypto demographic to the world of blockchain and fascinate both players and fans of chess alike.

Users will be able to bid on and purchase chess-related NFTs featuring iconic match moments, unique collectibles, chess related art, and much more. The platform’s interface will accommodate the use of both fiat and cryptocurrencies. Most interestingly, these NFTs will be in the new TrueNFT format on the Everscale Network.

About the FIDE World Championship 2021

The FIDE World Championship will be held at Expo 2020 Dubai and promises an enthralling contest that will delight chess fans and the wider public alike.

Organised by the International Chess Federation (FIDE), the postponed 2020 championship will see the reigning world champion, Magnus Carlsen of Norway, defend his title against the winner of the Candidates Tournament, the Russian Grandmaster Ian Nepomniachtchi. Following a tradition that goes back almost five centuries, the title of best chess player on the planet will be determined in a match, a face-off between two finalists where they play to the best of 14 games, with a prize fund of EUR 2 million (AED 9 million) at stake. This will be the fifth World Championship match for Magnus Carlsen, who first won the title in 2013 dethroning the Indian star Viswanathan Anand.The 30-year-old Grandmaster has topped the world ranking since he was 19 and holds the record for the longest unbeaten run in classical chess. Magnus is also the current World Champion in the ‘Rapid’ and ‘Blitz’ formats of chess.

The showdown between the finest chess players in the world highlights Expo 2020’s diverse and inspiring events calendar. The clash will take place between 24 November and 16 December 2021 at the state-of-the-art Dubai Exhibition Centre, co-located at Expo 2020. Headsets will be provided at the entrance, so the spectators can follow the commentary of the five-time world chess champion Viswanathan Anand, who will be present at the venue along with the International Masters Almira Skripchenko.

The Championship will also include a series of side events, including exhibition matches and appearances by former champions and celebrity fans. With live commentary capturing every move, the match will be broadcast live around the world, reaching a global audience of hundreds of millions.